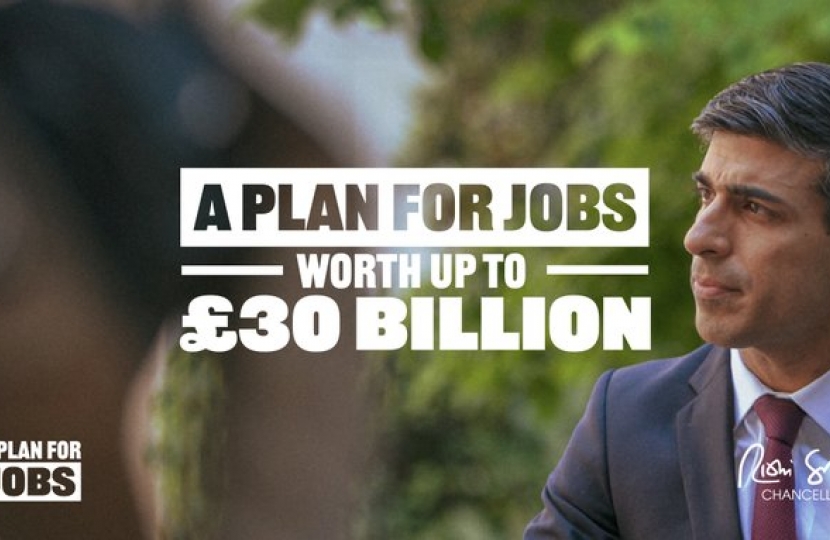 Stuart has welcomed the Plan for Jobs set out by Chancellor Rishi Sunak on 8 July, saying it provides much-needed support to businesses across Pudsey, Horsforth and Aireborough.

Since the start of the pandemic, the Government has said it will do whatever it takes to protect people and businesses from the immediate economic crisis. As part of this, more than 10,900 jobs have been supported through the Coronavirus Job Retention Scheme and 2,900 claims totalling £8,400,000 have been made through the Self-Employment Income Support Scheme in Pudsey alone.

The Chancellor has now set out the second phase of the Government’s response, focusing on jobs: supporting people to find the jobs that are out there, creating new jobs through investing in infrastructure, and protecting jobs by revitalising the hard-hit sectors upon which many jobs depend.

As part of this, employers will be encouraged to retain staff who have been on the furlough scheme, with the Government paying a one-off bonus of £1,000 for every employee who was furloughed and who is kept on until January.

Also included in the Government’s £30 billion Plan for Jobs:

The Chancellor’s Summer Economic Update, along with the New Deal for Britain announced by the Prime Minister last week, will benefit people and businesses across Yorkshire and the Humber. This includes:

Following our Plan for Jobs, the Government will soon turn its attention to a third phase – a moment for rebuilding. The Chancellor will produce a Budget and a Spending Review in the autumn.

Stuart said “I have been very pleased by the support that has been offered by the Government during this unprecedented pandemic, with one of the largest and most comprehensive packages of support anywhere in the world.

As we begin to carefully reopen our economy, I welcome all the support measures being offered by the Chancellor to support, protect and create jobs. Our plan will be a lifeline for countless people and businesses across Pudsey, Horsforth and Aireborough. I am particularly pleased that businesses are being provided with the confidence to retain and hire, create jobs in every region and ensure young people have the opportunity of a better start.

I do remain conscious of the industries and workers that need more support and I am very much continuing to press for this.”

Leeds moves to a COVID Alert Level of HIGH

Leeds is currently under a COVID Alert Level of HIGH.

I’d encourage all of my constituents to review the poster and the guidance below to understand fully what this means: